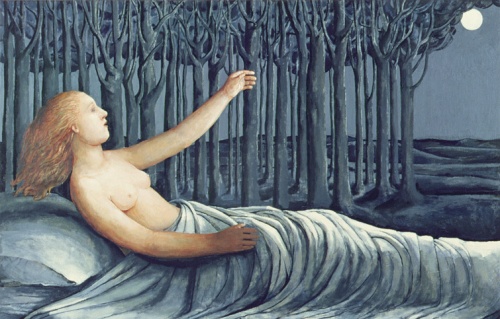 Perhaps because of events in my personal life, I find myself drawn to the Welsh artist Evelyn Williams (1929-2012). She pioneered a singular art of visionary and poetic power, albeit one that did not fit neatly into any art-historical box. She was largely neglected in her lifetime by the Art Establishment, although her paintings were admired by other artists and writers, including Angela Carter and Fay Weldon.

In the 1950s, when Evelyn Williams began her career, the art-world was a preserve of men and of male representations of women, many of them erotic. Female figures abound her art, with pale, oval faces, simply dressed or naked, their hair like the twisted skeins of embroidery silks. Even where naked (not nude), though, the figures suggest vulnerability rather than eroticism. Her subject, the most universal one of all, is human experience and human relationships – en masse, in groups, couples, or alone. This focus on human relationships isn’t domestic or cosy; indeed, the atmosphere in her paintings seems to oscillate between calm and disquiet. 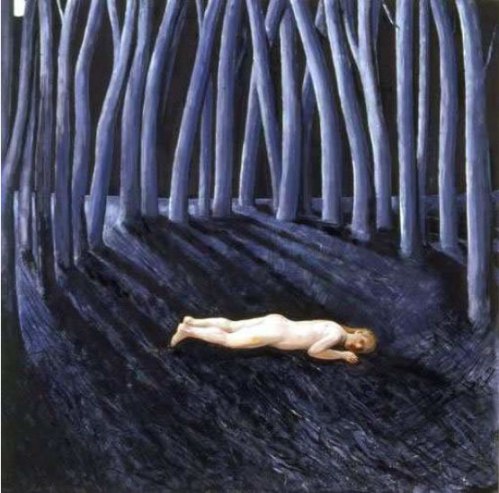 Williams’ art is centred round deeply felt narratives, which reveal the hidden, interior world of their subjects. The narrative can be suggested by something like the cup of a hand to a face, or by something more substantial – a woman sleeping in a woodland clearing, an almost fairy-tale image. The pictures are often stark, with strong contrasts of light and darkness. Themes of loneliness and alienation recur.

Williams wrote that her paintings attempt to make visible an inner anguish and experience: “My work comes from my life…it will always be introspective. This is me and all I know about. I would like to show how people feel about each other, and describe how they deal with their own personal predicament, but this is groping in the dark.” She also said: “Is there a disease that manifests a person taking upon themselves the suffering of the world? What is its name? I believe I have the disease. In my case it is at the very centre of my work”.

As well as paintings, she produced sculpture. In fact, in 1961 she won the John Moore prize for sculpture despite having entered the competition for painting – her masked heads, built out of layers oil paint, resembled clay reliefs. 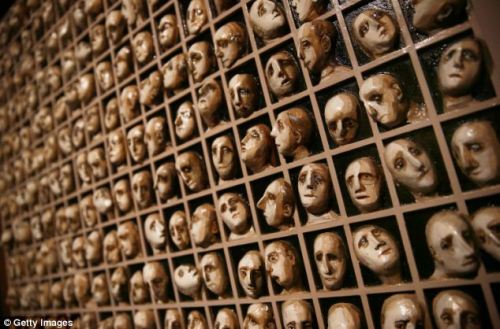 Williams’ work combines the vision of a poet and the empathy of someone listening with her heart. The pictures are revelations of inner experience – Keats ‘unheard melodies’ perhaps. Despite the disquiet, the artworks offer consolation and understanding.