Footprints: A New Anthology of Ecopoetry

Brokensleep Books is well known for its innovative publications. On 30 June, Footprints, a new book of ecopoetry edited by Aaron Kent and Charlie Bayliss, will be published, featuring a wide range of poets and visual poets. I am privileged to have three visual poems in this, based on oil slicks and pollution. The blurb reads:

The book can be preordered here.

Blown Away: the Sculpture of Penny Hardy

Metal is often seen as cold, hard and inert, but one artist has found a way to adapt the material so it appears loose, alive and free. British artist Penny Hardy makes life-sized human sculptures from discarded metal, each one exploring an emotion or experience. These are installed in open-air settings, in fields or gardens or overlooking water.

Hardy originally trained as a scientific illustrator, which taught her to examine the intricacies of natural forms and observational draftsmanship. Throughout her consequent working life alongside architects and designers, she developed a deep interest in three-dimensional forms. These skills informed her later work as a sculptor—and here she is self-taught over the last fifteen years.

She was drawn to creating human forms out of discarded objects and seems particularly attuned to a sense of movement and energy within material form, capturing these in all her pieces, transforming inert materials into sculptures with a tangible energy. ‘The sense of movement and dynamics within sculpture provides it with its own life and vitality,’ Hardy states.

In the Blown Away series, she chose to use old metal machinery parts because these were made to be resilient and strong, yet were thrown away at the slightest hint of failure. Hardy felt that these imperfect pieces should be recycled to show some of the effects machinery has had on our lives and the environment. She says, ‘By using discarded, man-made metal items—which have been so skillfully made and used to create their own mechanical energy—I hope to extend their life in another form, re-use that energy for a different purpose, and exchange their function to create a new entity.’ You Blew Me Away (159cm x 75cm x 55cm) and Erosion (159cm x 45cm x 45cm) are examples.

Hardy’s dance figures are wonderful affirmations of life and movement. Inspired by the dynamic forms of contemporary dancers, they use a flexible material like aluminium to re-create a visual sense of movement. Angels in Harlem (300cm x 200cm x 750cm), for instance, is a sculpture on stilts designed to gently sway in any breeze, creating a sense of constant movement.

Hardy has exhibited throughout the UK since her first public exhibition of dance sculptures in 2006, including at Doddington Hall, Hill House Dartington and Royal West of England Academy. More about the artist can be found on her website here

The Flowers and Chocolate of Decay: Anya Gallaccio’s art

In the period since ww2, art that involves nature or natural processes has taken diverse forms, from the huge spiral artworks of Robert Smithson created on the shore of the great Salt Lakes, to the walks of Richard Long through the English landscape, to Andy Goldsworthy’s ephemeral leaf or ice sculptures in outdoor settings. Within such art, there has always been the question: is the immediate experience of the natural world translatable into a gallery? As artists still want their work to be seen and thought about, for better or worse the gallery is the best place – whether in the form of exquisite photographs (eg of Goldsworthy’s sculptures), photographs taken with indifference to art or framing (eg of Smithson’s Spiral Jetty), or data about a walk offering ‘evidence’ of the artwork (eg Long).

Anya Gallaccio (born 1963, UK) has an intriguing way of including natural processes within gallery-based artwork. She creates site-specific installations, often using organic matter such as flowers, fruit, ice, wax and chocolate. An artist who came of age at the same time as the more famous Damien Hirst, Gallaccio challenges the traditional idea that artworks should be a monument within a museum or a gallery; she makes art which changes over time, rotting, melting, being oxydised. It is art about ‘process’ as much as ‘object’, like an unruly experiment, the end result of which cannot be predicted; and as such it is hard to document with a simple photograph – being principled, she refuses to take photos of her own art to sell. She also emphasises the personal experience of the viewer: her work lives on not as photographs that she exhibits but as memories in those who experienced it as well as in the idea of the artwork itself. The emphasis on personal experience puts one in mind of Anthony Gormley’s perceptive comment that art is about ‘reasserting our first hand experience in present time’. 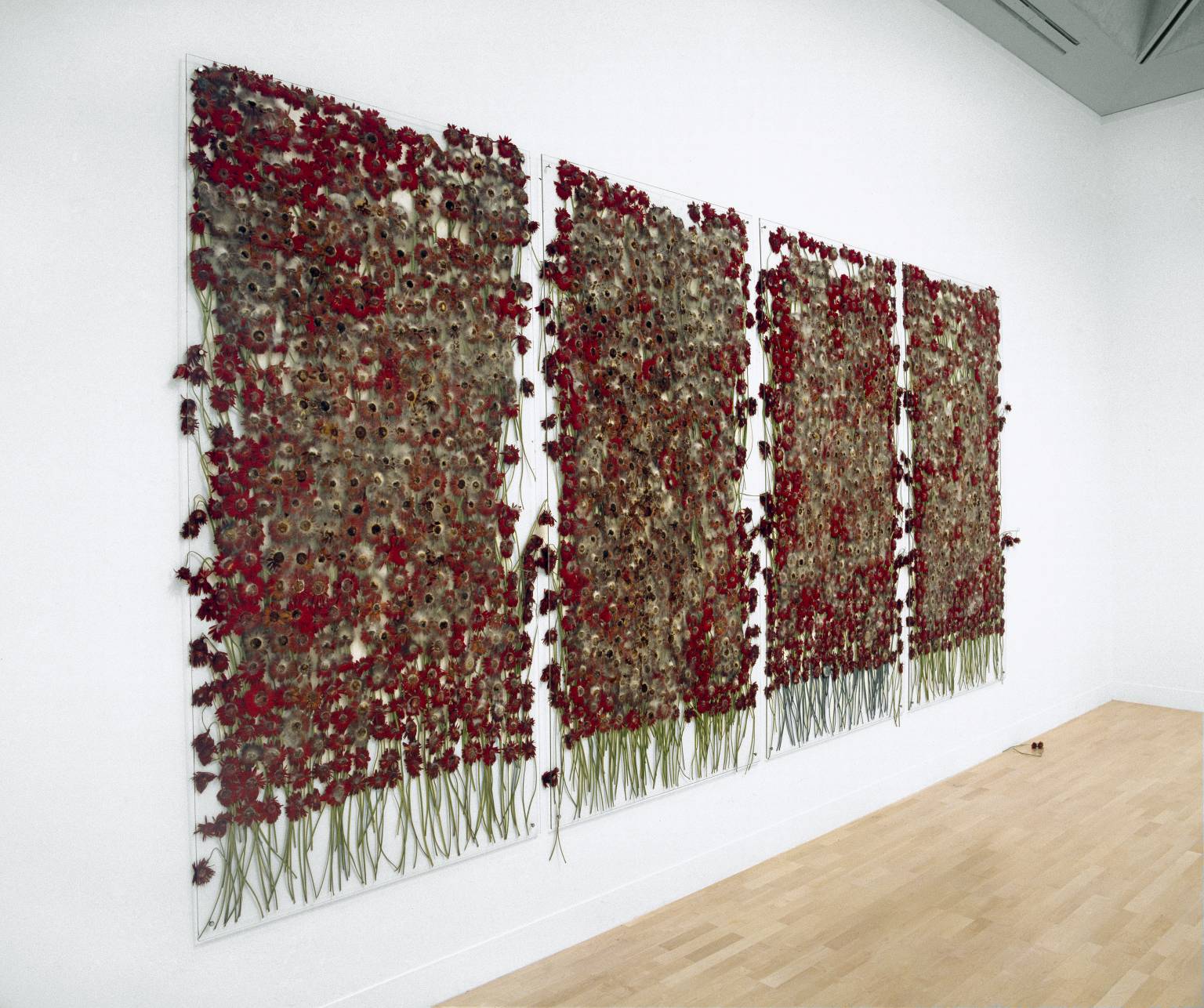 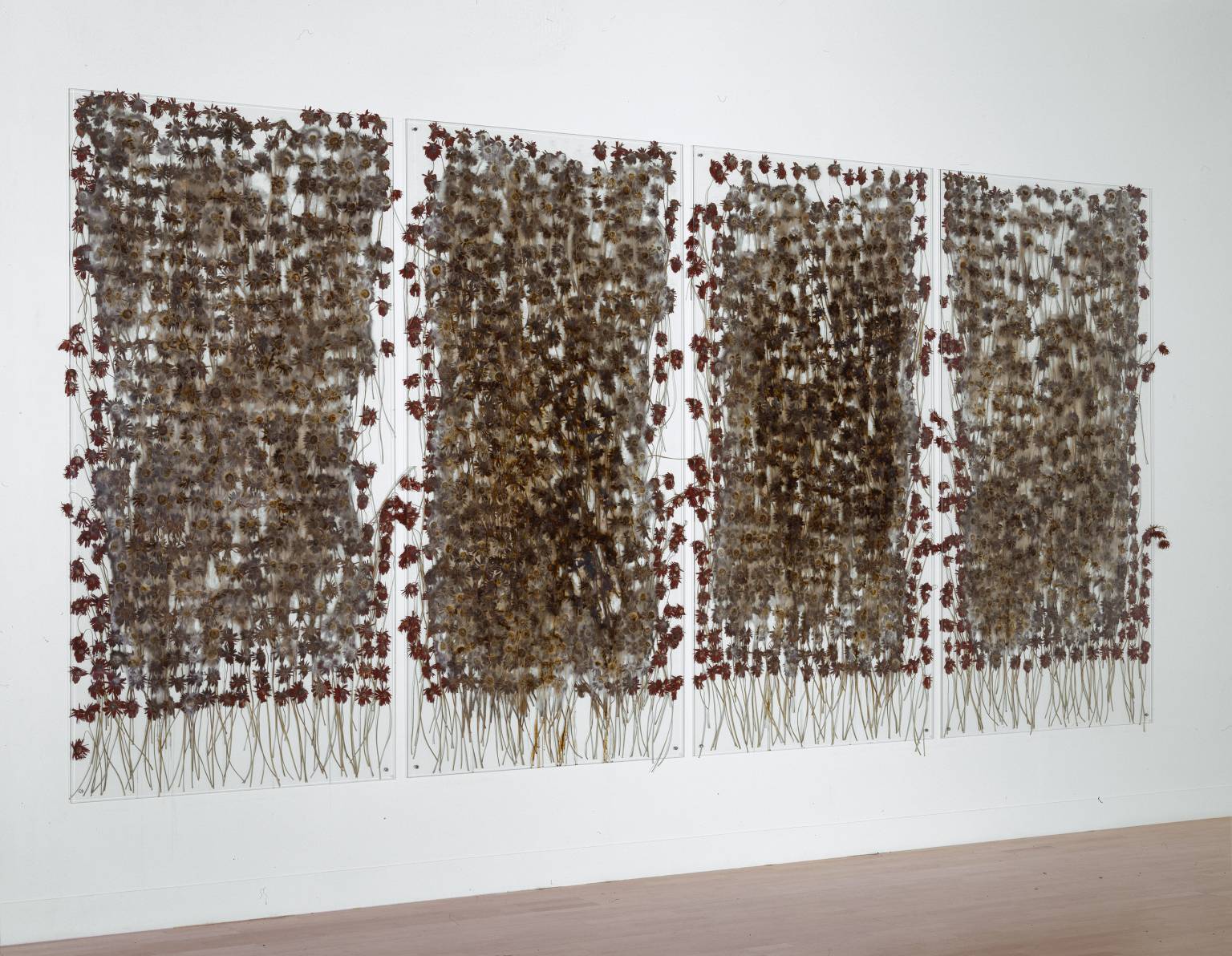 Some of Gallaccio’s artworks have been repeated at different sites. In ‘Preserve Beauty’ (1991-2003), between 1600 and 2000 red gardenias are arranged in four adjacent rectangular compositions underneath large panes of clear glass, with the flower heads facing out towards the viewer. Over time, the gardenias wither and die; as well as changes to the appearance of the work, there are changes to the smell in the gallery, and some flowers even fall out to rot on the floor. ‘Preserve Beauty’ has echoes of Dutch vanitas paintings of the 16th/17th century, which contained collections of objects symbolic of life’s transience and death’s inevitability – a meditation on decay, change, mortality.
The red gardenias, a mix of gerbera and daisies, are grown for commercial consumption and thus are a type of readymade according to Gallaccio – an everyday, often scentless and mass-produced object. These flowers are chosen as they blur the gap between ‘the natural’ and objects of a commodity culture. She explores this overlap between natural objects and those of disposable commodity culture, specifically in relation to the wastage and decay that is usually hidden from consumers. She has stated that, ‘we experience so much of the world at a mediated and sanitised distance, so I try to make art that is not complicit with this structure’. 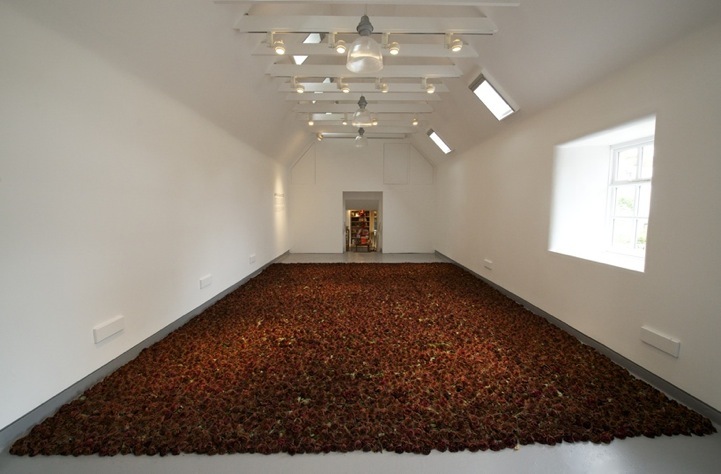 In ‘Red on Green’ (2012) Gallaccio plucked the heads of 10,000 red roses and arranged them into large rectangle on a gallery floor. At first the installation might seem like a grand romantic gesture. However, Gallaccio’s interest is piqued in what the installation becomes over time. In a way, ‘Red on Green’ becomes a kind of natural performance as the field of red shifts to brown. The symbol of the rose is used as a starting point for meditating on the natural processes of death and decay.

For her installation ‘Stroke’ (2014-15), she constructed a room made of dark chocolate, inviting visitors to lick the walls if they so dared. The room was partly intended to be a feminine space in an art-world defined mostly by men: the artist sees her unusual material as one normally associated with the female domain and she thus brings the domestic out of the shadows, into the public arena. Painted in thick, gentle layers of chocolate, the room was dark and cavernous, a space to be entered into and experienced. The piece relied upon the viewer drawing meanings from the artwork, though it was as much about fantasy and anticipation as the actual (disappointing) experience of sitting in a chocolate room. As the artist explained, the real chocolate room was distinct from what one might have expected. As time wore on, the sweet odour turned sour; the chocolate, painted onto the walls, oxidised; insects moved into the space. More an encounter with decay and discomfort than with sensual pleasure.

Other works include Glaschu (1999), in which a pattern outline from a paisley carpet, drawn from flowers and foliage, pierces a thinly poured layer of cement floor in an elegant neo-classical interior, so that living verdure creeps from the meandering cracks. The theme of nature reclaiming its territory from human ruins is poignant.

More about Gallaccio can be found here https://www.blumandpoe.com/artists/anya-gallaccio