Bill Brandt (1904-1983), a founding father of modernist photography and one of the ‘greats’ of British photography, believed in “the power of seeing the world as fresh and strange” and thought photographs could help people “see the world anew…as something interesting and exciting.” His images are atmospheric – a penchant was for sombre, brooding scenes, with strong tonal contrasts and dramatic formal compositions. His vision and reputation were cemented in the 1930s in London but drew on his time in Man Ray’s studio in Paris, which gave his work a psychological complexity, even latent surrealism. While his style is distinctive, he was known for the diversity of his subjects, from social class, to London in wartime, to Northern industrial towns during the depression, to portraits of British literary and artistic figures, to landscapes, to strange, sensual nudes on the Sussex coast. 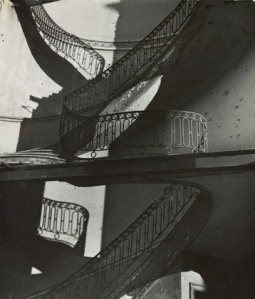 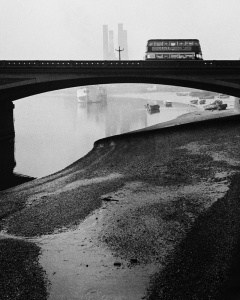 Bombed Regency Staircase (1942) was part of his series photographing London during the Second World War. Although the subject is obviously bleak, Brandt brings to the staircase a startling vision and latent beauty, with its arresting contrasts of shadow and light and sweeping lines of the cast-iron banisters, which seem to twist back on themselves improbably. In Battersea Bridge (1930s), taken from a low angle, the curves of the River Thames and its shoreline have a sensual, organic quality, while the sharp distinctions in tone and bold horizontal line of the bridge with the bus add visual drama. Francis Bacon (on Primrose Hill, 1963) combines portrait and landscape, the receding diagonal of the wet path contrasting dynamically with the oddly tilted lamppost and with Bacon himself, who has a dour, introspective expression yet stands solidly against the stormy weather. There is a surreal sensibility here, the work seeming both familiar and strange, and a narrative quality – the image could be a still from a film about Bacon or one captured at a significant point in a story. These three photographs all attest to Brandt’s sophistication as an artist. “[The] viewer will sense himself in the presence of a rare concentration of thought and feeling,” observed Clive James in 1981. 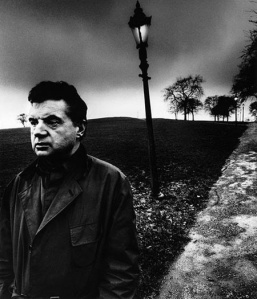 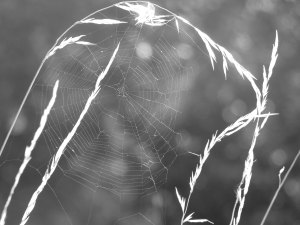 “And the cobweb is the secret score/ To the music we are searching for.” Hugo Williams. 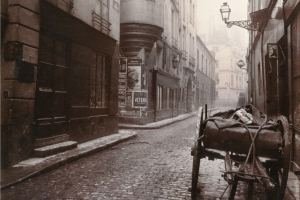 Misty mornings in parks, the shape of statues echoing that of nearby trees; long cobbled streets that invite the eye to wander down them; mannequins in shop windows that appear oddly animate. These are some of the 10,000 images that Eugène Atget (1857-1927) took of Paris in the first quarter of the 20th century, which are both visual documents of the city and carriers of a poetic sense of place. Atget’s photography was a quiet, personal obsession – this was long before the advent of the ‘photo-essay’ in contemporary art, in which a subject or world is photographed multiply and explored in depth. Atget didn’t even consider his work as art although his work was lauded by the Parisian avant-garde, by Man Ray who saw in his work a latent surrealist sensibility, an unexpected evocation of the unconscious life of the city; by Andre Breton who published him in Le Revolution Surrealiste and in his own books. 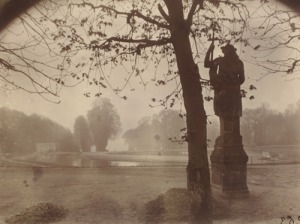 Atget used old photographic equipment with very long exposures so his photographs are often devoid of people. This allows the form of the city to be clearly seen, its architecture and arched bridges, its sweep of streets and stairwells. Yet the empty city still bears a palpable, if mysterious, presence of real lives lived and so invites narratives, stirs the viewer to imagine. Atget’s images also appeal through their nostalgia. They were memory traces of a vanishing world – he worked in the old parts of Paris being bulldozed to make way for wide modern boulevards. John Szarkowski, former director of photography at MOMA in New York, believed that the way Atget blended documentation and a distinct personal vision made him the first real modernist photographer: “The pictures that he made…are seductively and deceptively simple, wholly poised, reticent, dense with experience, mysterious, and true” (from Szarkowski’s Looking at Photographs). 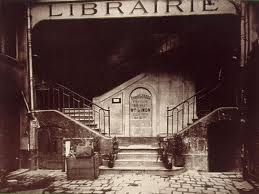 How do you photograph dreams? 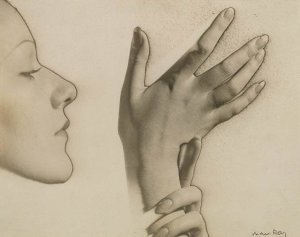 The advent of the avant-garde in the early 20th century had a liberating effect on many photographers. Surrealism in particular was a godsend for those frustrated by the verisimilitude of photographs, by their adherence to realism. Man Ray (1890-1976) was the driving force behind revolutionising photography in this way, turning it into a poetic means to investigate the world and the depths of the human psyche. New techniques like solarization and negative prints produced dream-like transformations that could provoke (at least at that time) a kind of psychic shock. In an interview in 1964, Man Ray observed, “The [solarization] technique allowed me to…get away from banality…to produce a photograph that would not look like a photograph.” His ambition was to photograph dreams and ideas rather than things. Using the new techniques, parts of the body – hands, faces – metamorphosize into dream-like aureoles that are alluring and strange. The lines which trace the shape of the body parts are sensual – almost erotic contours that fingers might map. 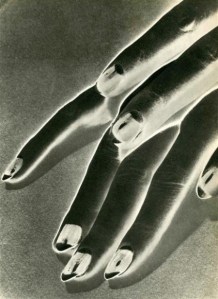 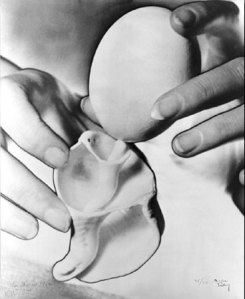 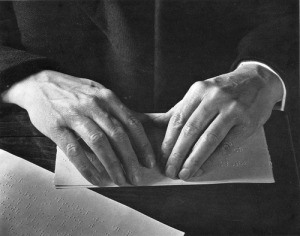 Turning the photographic eye on particular parts of the human body was a distinctively 20th-century phenomenon – perhaps a latent metaphor for the fragmentation of the modern condition itself. The hands and the eyes, which lie at the root of the photographer’s craft, have been particularly privileged within the modern ‘focus on the fragment’.

An example is Imogen Cunningham’s (1883-1976) ‘Hands Reading Braille’. The pale hands, which emerge from a diffuse blackness – evocative of the man’s blindness – sit over white braille paper. The striking composition, and contrasting shade and light, suggest it is through the man’s hands, through touch, that he is able to reach out and ‘see’ in the darkness. The details of the bodily ‘fragment’ – the skin creases, protuding veins and tidy nails – accentuate the man’s profound humanity. Altogether this feels a quiet but potent image.