‘Art’s whatever you choose to frame’ (Fleur Adcock)

In a local alleyway, we find a series of three abstract artworks on the side of an abandoned, boarded-up building. Each appears to be by a different (local?) artist and in a distinct style of abstraction.

From left to right in the photo above (see also individual photos below), the first artwork, Involuntary Abstraction by Nicholson Haddock, is rather raw and gestural in its forms, with graffiti layered over parts; the second, Parallel Textures by Anne Dinsky, is more textural and subtle in execution, with muted grey and sandy colours and vertical white parallel lines; the third, The Vertigo of Vision by Joan Biro, is a dense work with a fuzzy, anarchic composition that moves the eye around dizzyingly – this artwork is mainly black and white, but has spots of blue and half-erased words in red.

On the bottom corner of the third artwork (see photo below) appears the Fleur Adcock quote: ‘Art’s whatever you choose to frame’. Does this mean these artworks have been ‘framed’ by adding titles/names, so the public can see them not as abandoned, boarded-up windows but as involuntary or ‘found’ art? A Duchampian or conceptual intervention in a public space? 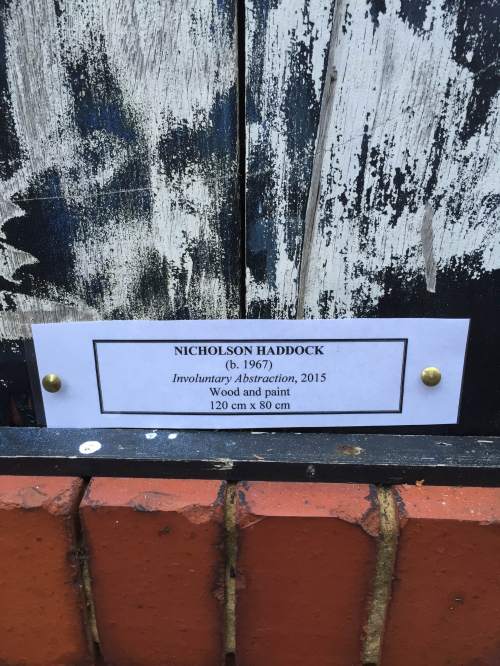 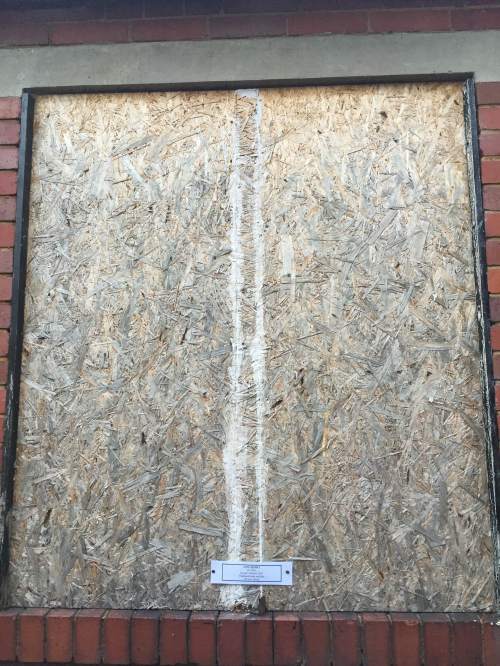 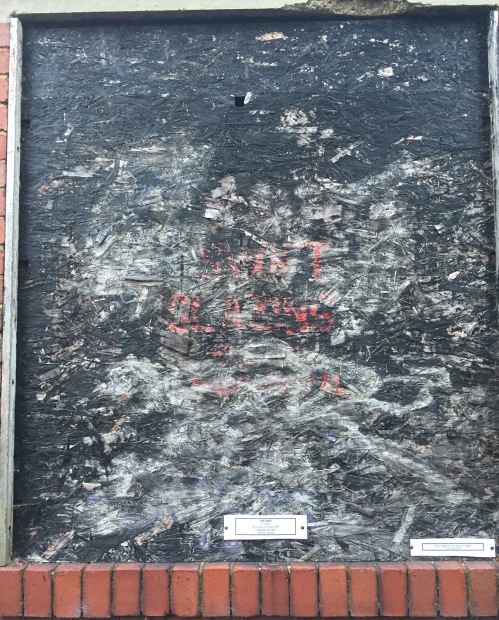 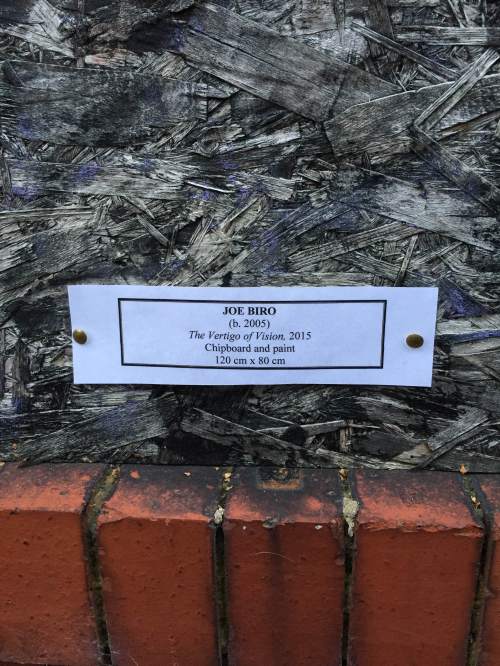 February Oodlings and doodlings: or some things I did and pondered in February (which may or may not be true…)

I saw a cloud in the form of a giant sky-turtle. I wondered about a dystopian world in which clouds are used as advertising billboards. I tweeted about imaginary essays by Jorge Luis Borges and about graveyards of red telephone boxes. I watched two mesmerising foreign documentaries, Nostalgia for the Light, and Le Quattro Volte, and wrote a song inspired by the former. I ate far too much chocolate, albeit dark, 85% organic. I sat by the river one night and spoke to a huge, gold-glowing magic fish in the water.

I celebrated writer Russell Hoban’s birthday on February 4th by putting quotes by him up around the village green and by the river. I listened to blue-tit and collared dove song each morning and wondered if birds sing in their dreams. I took photographs of knots and chains by the river’s edge and of silhouettes on a jetty; and I took a video of feet walking along a jetty. I had some funny conversations with a punning cat. I wrote most of a short story. I decided, in a pretentious moment, that reflections in windows at night intimate the real, slippery, multi-dimensional nature of reality far more than the clear light of day does. I rediscovered the beauty and eccentricity of singer-songwriter Regina Spektor.

I had an email correspondence with a friend about Keats’s art of negative capability, the ability to live with doubt, uncertainty and mystery – I concluded that I was aspirant but wanting in this respect. I spent quite a bit of the month in a bad relapse of the chronic illness I have, in significant amounts of pain, but congratulated myself on handling it with a degree of stoicism. I read an impressive surreal novel, Liquidambar, by the New Zealand writer Chris Bell. I had fish and chips at the end of a glistening road with my mother. I got angry yet again with the government for their treatment of the poor and sick, for their policies of austerity that are plunging the poor into greater poverty even as the rich stock up their coffers. I fell in love with life whilst watching the charming, gentle video of the Kings of Convenience’s I’d Rather Dance Than Talk with You.

(Note I got this summary-of-month idea from another blog I sometimes visit, tho that blog only does real events)

Cloud in the Form of a Giant Sky-Turtle? 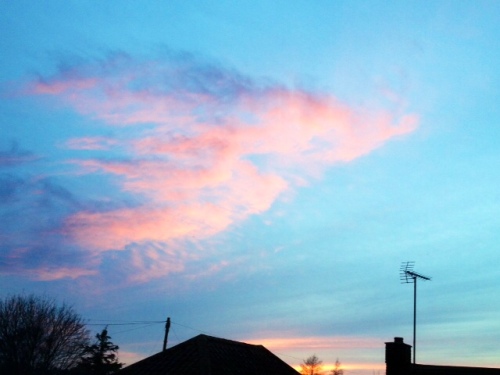 “What most people take to be reality is a load of old nonsense invented by not very inventive minds.”

“What most people take to be reality is a load of old nonsense invented by not very inventive minds.”

Every 4th February  – the birth date of Russell Hoban (1925-2011) – fans of this brilliant author write their favourite quotations from his books on sheets of yellow A4 paper and leave them in public places, and/or share them online (this is the Slickman A4 Quotation Event or SA4QE, which began in 2002.)

I first became aware of the SA4QE in about 2005 from an article in The Guardian, and have done the event ever since, often leaving quotes on A4 paper around the local village green next to the river. Doing this feels playful and subversive, a fitting tribute to a quixotic writer. I like the quotes to express what I love about Hoban – his mix of poetry, profundity and humour, his ability to veer effortlessly from the sublime to the hilarious.

“It is a strange and frightening thing to be a human being, to partake of the mystery and madness of human consciousness.”

I also leave smaller versions of the quotes tucked under baked-bean tins and packets of biscuits in the local village shop. I like the idea, and like to think Hoban would have liked the idea, of someone picking up a can of baked beans and finding underneath a small piece of paper that reads, “What most people take to be reality is a load of old nonsense invented by not very inventive minds.”

As I was finishing up, a woman with a golden Labrador walked past, stopped, read a couple of the quotes and looked at me. “Oh,” she said. “Oh. Oh.”

She smiled and walked off. I felt it was a suitably Hobanesque encounter.

‘Hear the earth, ponderous with evening, turning to the night.’

‘Rising in the moony ocean night and never, never finding
never until now finding
the mystery of me so long dreamt of’

More information about the event and about Russell Hoban can be found at http://www.russellhoban.org/sa4qe

There is a fascination in contemporary photography with overlooked objects and places – these are framed anew though the photographic lens and their imaginative or metaphoric possibilities explored. Wim Wenders (b.1945), better known as the Director of films like Paris, Texas (1984) and Wings of Desire (1987), works in this vein, taking photographs of places that have been abandoned or are in a state of deterioration: run-down movie theatres in Arizona, boarded-up cafes in New Mexico, decaying backyards in Moscow. His work carries a sense of fragility and dislocation, the original purpose of the places or things often having been lost.

Ferris wheel (2008) is typical of the desolate isolation in Wenders’ photographs. The artist came across the abandoned Ferris Wheel in the middle of an empty field in Armenia. About how he discovers such places, the artist has said, “Everyone turns right, because that’s where it’s interesting. I turn left, where there is nothing. And sure enough, I soon find myself in front of my sort of place…[one] that is strangely quiet or quietly strange.”

In Black Square (2002, New Mexico), the hues of blue and red contrast with, even highlight more saliently, the decaying wall and tatty old advert, which poignantly includes the words Why Not Now. This photograph shows a deft painterly skill with colour and composition, as does Street Corner in Butte (2003, Montana), with its sharp vertical and horizontal lines and stark contrasts that render the shadows almost black. With the bleak isolation and uncanny feel here, this could be a scene from an Edward Hopper (1924-67) painting; and Wenders’ nod to Hopper is clear in films like The End of Violence (1997), in which one scene recreates the painting Nighthawks (1946).

Wenders’ photographic sensibility is akin to that in his films, and is similarly a meditation on memory, loss, time, nostalgia and emptiness, although he observes that photographs allow him to focus on something other than people: “I have sharpened my sense of place for things that are out of place”. And yet Wenders’ photographs still ‘speak’ – of “all those (people) who once were there, who lived there, who passed through, and who messed something up”. 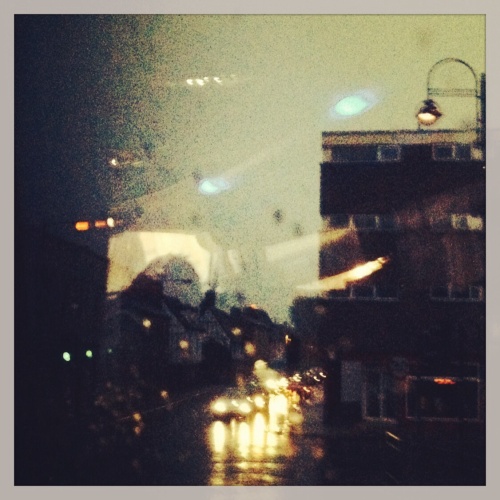